Sadly, this pitcher passed away this week from cancer: 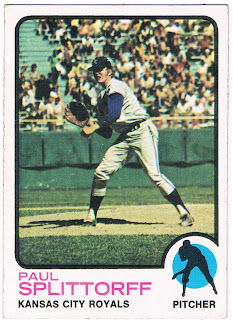 Card #48 -- Paul Splittorff, Kansas City Royals
Paul Splittorff pitched in Kansas City between 1970 and 1984. Although he was rarely considered to be the ace of the staff, he was the epitome of consistency and ended up with the franchise record for wins when he retired. Nearly 30 years later, he's still the record holder despite young guns on the team like Bret Saberhagen and David Cone.

As a Yankees fan, it was hard to like Paul Splittorff. Every year between 1976 and 1978 and again in 1980, the team had to go through the Royals in the playoffs to make the World Series. Since he was a left-handed pitcher, he usually was effective against the Yankees because they tended to use a lot of left-handed hitters to take advantage of Yankee Stadium's dimensions. In those four postseason series, Splittorff pitched against the Bronx Bombers six times and never lost against them.

Rest in Peace.
Posted by Chris Stufflestreet at 8:30 AM