Goin' to the Archives...

Yes, Topps has been known to use old photos from time to time, but this picture looks a little bit odd: 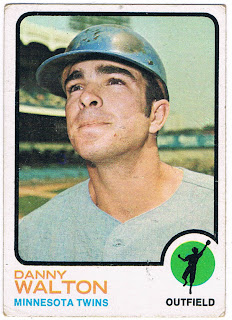 Card #516 -- Danny Walton, Minnesota Twins
Walton was traded to the Twins after the 1972 season, so obviously he didn't have a picture available in his new uniform. For '72, he was mired in the minors at Syracuse. His last major league experience had been with the Yankees in 1971...but wait...the picture shows him in front of that familiar Yankee Stadium facade but wearing a gray jersey. Therefore, the picture most likely shows him with the Brewers, the team he played with in 1970-'71.

Danny Walton never really managed to catch on anywhere as a regular player. He would spend the entire 1973 season in Minnesota but only managed to play in 37 games for them. After that, he was back and forth between the majors and minors through 1980 (except in 1978, when he went to play in Japan). He was constantly on the move as well, going from Minnesota to the Dodgers in 1976, returning to the Astros -- where he debuted in 1968 -- in 1977, to Japan, back to the minors for '79 and finally getting into ten games for the Rangers in 1980 before hanging it up.

Along the way, he wore nine different uniform numbers, never taking one to a new team.
Posted by Chris Stufflestreet at 8:30 AM