Willie Mays hit 52 home runs in 1965. Cecil Fielder hit 51 in 1990. In the 24 seasons that made up the interim, only one person managed to reach the 50-homer mark in a single season. It wasn't Reggie Jackson or Mike Schmidt, it was this guy: 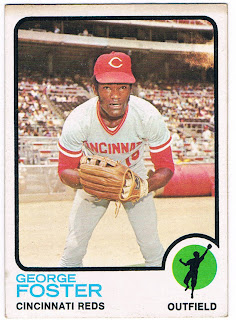 Card #399 -- George Foster, Cincinnati Reds
He knocked 52 round-trippers in 1977. A performance like that today might have fans claiming he was cheating, since he never hit more than 29 before that season and only topped 30 once more afterward.

In 1973, however, George Foster was still a part-timer on a Reds team that was loaded with talent. In the '72 NLCS, Foster scored the run that won the playoff after coming in as a pinch runner. In 1973, he only appeared in 17 games. Used mainly when an outfielder went down with an injury (like Bobby Tolan did in 1971), Foster was an impact player that couldn't land a regular role with the team. In '74, when Tolan was traded away, Ken Griffey was placed in the outfield instead.

However, Sparky Anderson decided to move Pete Rose to third base and Foster was given the chance to show he could contribute as an everyday player. The team ended up winning the next two World Series titles. No, I'm not suggesting that move directly led to the titles, but Foster was a very big cog in the Big Red Machine during those years. Even as the team declined as its players left or retired, Foster was still a workhorse. He was an All-Star every year from 1976-'79 and the leagues MVP in '77, the year he hit those 52 homers.

In 1982, he was traded to the New York Mets. By that time, he was still a gamebreaker, even though his skills had eroded. He was a valuable veteran presence as the team built itself into one of the best teams in baseball. Sadly, the year that the Mets were able to win the World Series, Foster wasn't able to join them in the clubhouse. The Mets had released him in August. He then played for the White Sox for a month before being released again.

While not a Hall of Fame caliber player, there's little doubt that George Foster could flat-out play the game.
Posted by Chris Stufflestreet at 8:30 AM