Put it Right There...

Here's a player who was much better known for the glove he's showing here than for his bat. However, he made his bat count in 1981 when the Dodgers squared off against the Yankees in the World Series for the third time in five years: 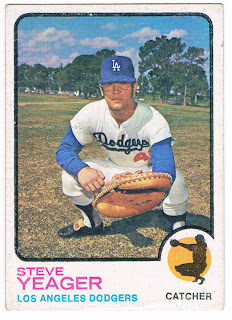 Card #59 -- Steve Yeager, Los Angeles Dodgers
This is Steve Yeager's rookie card. He made his big league debut in August of '72 and backed up Joe Ferguson behind the plate. However, he became known for a wicked throw to second against would-be base stealers and eventually won the starting job. He became well-regarded for his defensive prowess and ability to call a game from behind the plate. The Dodgers won four pennants during his time there and he was a big piece of the puzzle in each of those seasons.

However, he was also known for his weak offense. However, in 1981 he had an amazing Series (for him, anyway) against the Yankees. He only hit .286 but his hits were timely, including a homer that beat Ron Guidry in game 5. His efforts gave him a share of the Series MVP award that year.

After that, Yeager was relegated to backing up Mike Scioscia and stayed with teh team through teh end of 1985. He finished up in Seattle for the 1986 season.

Yeager was the inspiration for a plastic "turkey neck" used under the catcher's mask when a bat broke in 1976 and sent several splinters into his throat. While that seems like a sensible idea, it's worth mentioning that the bat belonged to teammate Bill Russell and he was standing in the on-deck circle at the time of the accident.

His cousin was famed aviator Chuck Yeager. He was also known for embracing the L.A. lifestyle. When he was married on the steps of City Hall, sitting Los Angeles mayor Tom Bradley was his best man.
Posted by Chris Stufflestreet at 8:30 AM