The title of this post has a double meaning. Not only was Jose Cardenal wearing uniform #1 for the Cubs, he also led the team in batting, doubles and stolen bases. Here is the man named Cubs Player of the Year for 1973: 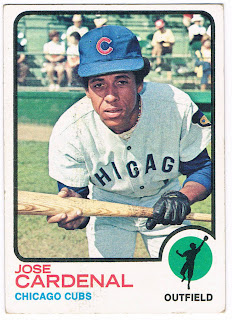 Card #393 -- Jose Cardenal, Chicago Cubs
While he appears to be squaring for a bunt, Cardenal may simply be sneaking up on the camera. He gained a reputation for imaginative excuses. He was known to watch for bugs in the Wrigley Field ivy during long stretches of games. He once asked to sit out a game and told Whitey Lockman that crickets in his hotel room had kept him up all night. Another time he claimed his eyelid was stuck open.

Something tells me that if Jose Cardenal hadn't been a decent outfielder -- he definitely was -- some team might have kept him specifically for the comic relief.

Cardenal played for nine different teams between 1963-'80. After his playing career was finished, he became a coach. From 1996-'99, he won three World Series Rings (something he never managed as a player) as a member of the New York Yankee coaching staff.
Posted by Chris Stufflestreet at 8:30 AM