The title for this entry refers to the way Dick McAuliffe is holding the bat in this picture: 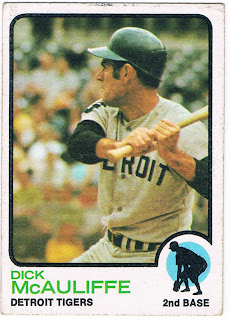 Card #349 -- Dick McAuliffe, Detroit Tigers
That's an interesting action shot. A close-up that excises the pitcher, catcher and umpire. Considering the number of photos used in the 1973 Topps set that include half a team in them (and are sometimes horizontally oriented), it's odd that the company cropped this photo in such a manner.

At the time, Dick McAuliffe had been with the Tigers since 1960. He was the starting shortstop until 1966 and moved over to second in '67. He was a key player for the Tigers in their Championship season in '68, going the full season without hitting into a double play. 1973 would be his final year in Detroit, though, and he was traded to the Red Sox after the season.

Winding down his career in 1974, he began the '75 season managing one of the Red Sox' minor league clubs but would be called up late in the season to help the team's push toward the postseason. He didn't make the postseason roster that year and retired.
Posted by Chris Stufflestreet at 8:30 AM