Before There Was Cal...

Here's a player whose name I always pronounced wrong until later on: 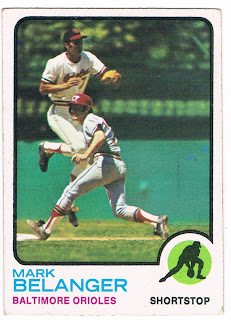 Card #253 -- Mark Belanger, Baltimore Orioles
Since Belanger was no longer an everyday player when I first got into baseball, I never had the opportunity to hear an announcer pronounce his name. Therefore, I always wanted to say "BELL-in-jur" rather than the correct "Bah-LAN-jur."

At first glance, this photo appears to have been taken during the 1970 World Series against the Reds. However, closer inspection of the colors reveals an Indians uniform, so Belanger's trying to turn a double play against Jack Brohamer.

Before Cal Ripken, Jr. came along, Mark Belanger owned the all-time Orioles records at shortstop. He was their regular at the position between 1965 and '81. While the back of this card mentions Belanger had already won two Gold Glove awards, he would go on to win another in '73...and every year from then until 1978. In fact, second baseman Bobby Grich also won a Gold Glove from '73-'76 and Brooks Robinson earned them at third through '75. That was a solid infield, one that ended up helping the Orioles get to the postseason several times.

Belanger was another in a long line of "good field, no hit" shortstops. His career .228 average is the third-lowest all-time among players with over 2500 at bats. Despite those anemic numbers, he was actually quite successful against Nolan Ryan and Bert Blyleven, two pitchers who struck out an awful lot of batters at the time.

During his playing days, Belanger was active with the union, even sitting at the negotiating table in 1981 (which may have helped lead to his '82 season in Los Angeles). He would serve as a liaison for the MLBPA after his retirement. Sadly, Mark Belanger died in 1998 of lung cancer.
Posted by Chris Stufflestreet at 8:30 AM