The last entry to this blog featured Graig Nettles, who enjoyed a long career in the majors. His brother's career wasn't quite as long or successful: 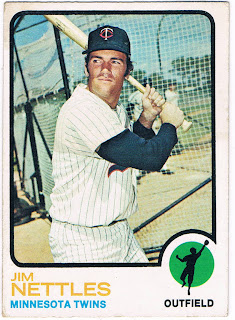 Card #358 -- Jim Nettles, Minnesota Twins
Though Nettles is shown as a Twin here, he didn't play for them at all in 1973. Instead, he spent the season in the minors. After the season, he was traded to Detroit. After that, he was all over the place, from the majors to Japan to Mexico and back.

After spending 1970-'72 in Minnesota, he never strung together two straight seasons with any club. He came up with Detroit in '74 and failed to make the team in Cleveland during Spring Training the next year. He didn't get back in the big leagues again until 1979, when he played 11 games for the Royals. Finally, there was one game with Oakland in '81 when he came in as a defensive replacement in the ninth but didn't get to the plate.

After retiring as a player, Nettles managed in the minor leagues from 1983-'96. At one of those stops (A-level Madison in 1986), he even came up to the plate for one last time. He failed to get a hit and went back to the dugout.
Posted by Chris Stufflestreet at 8:30 AM