Hoofing Around Third and Heading Home

A great action shot shows the Braves' backup catcher taking the extra base and heading home in a big hurry: 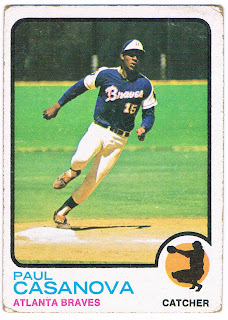 Card #452 -- Paul Casanova, Atlanta Braves
(Read the comments for an explanation of when this picture was most likely taken. Thanks ecloy.)

Paul Casanova was a Cuban native who came up with the Senators in 1965 and remained with them until the team moved away from the D.C. area. The team didn't keep him during the move, however, as he was traded to Atlanta before they ever played their first game in Texas. Since Atlanta already had a capable catcher in Earl Williams, Casanova was relegated to a backup role. In 1973, he managed to catch Phil Niekro's no-hitter on August 5.

After a diminishing role with the team after Johnny Oates arrived, Paul Casanova was released by the Braves after '74 and never played in the majors again.

One interesting thing about Casanova was that he played all his 811 games behind the plate. That's an unusual stat, considering the number of catchers who also play at other positions to ease the strain on their knees, as well as the fact that he spent several years as a second-stringer and might have been compelled to fill in elsewhere.
Posted by Chris Stufflestreet at 8:30 AM