Last September, I featured one of three Alou brothers who were playing baseball in 1973. Here's the second: 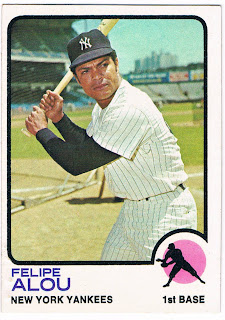 Card #650 -- Felipe Alou, New York Yankees
Felipe Alou was the father of future major leaguer Moises Alou. Baseball was in the family's bloodline; besides his brothers and son, cousin Jose Sosa and nephew Mel Rojas played in the major leagues.

Both Matty and Felipe Alou were member of the new York Yankees as 1973 began. They had been teammates before, playing as part of an all-brother outfield for the Giants in 1963. However, Felipe was waived late in the season and claimed by Montreal. In 1974, he began the season in Milwaukee but would be released again early in the season.

After his playing days were over, he returned to the Expos and became a minor league manager. He stayed with the organization for several years, even turning down an offer to manage in San Francisco in 1985 out of loyalty. In 1992, he would become the first Dominican-born player to manage in the majors when he was promoted to Montreal's field manager position. While there, he managed his son and became the most successful skipper in the club's history. In 1994, his team had the best record in baseball when the season was stopped by a strike. After being fired in 2001, he went on to manage a few more seasons with the Giants.
Posted by Chris Stufflestreet at 8:30 AM