No, His Middle Initial Wasn't "F"

John Kennedy from Boston. Just a decade before, that name brought images of a young President (actually, it still brings up that image today, thanks to the memories of Baby Boomers and nostalgia). However, this guy's middle name was Edward and -- while he did share the same May 29th birthday with JFK -- he was actually born in Chicago: 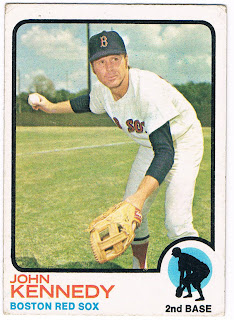 Card # 437 -- John Kennedy, Boston Red Sox
This John Kennedy didn't exactly make the Fenway faithful forget their Favorite Son. He played for the Red Sox from 1970 to '74 but was never a regular player. In fact, the back of the card mentions that his nickname is "Super Sub."

Before his Red Sox days, Kennedy was a member of the '69 Seattle Pilots and came up with the Senators in 1962. Yes, he was in D.C. at the same time the other John Kennedy was residing on Pennsylvania Avenue. However, he never became a full-time player there until 1964, when the name had a more somber connotation. He would move over to the Dodgers the next year.

While with Boston, he's been credited with giving teammate Bill Lee the nickname "Spaceman." During one of the Apollo missions, he supposedly told a writer that news about men going to the moon didn't really matter much, since the team already had their own "spaceman" right there in the clubhouse.
Posted by Chris Stufflestreet at 8:30 AM