As the scoreboard above them says, here are the 1972 Pittsburgh Pirates: 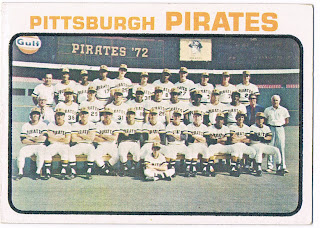 Card #26 -- Pittsburgh Pirates Team Card
They were the N.L. East division leaders that year, after winning the '71 World Series. While such a picture would make their fans quite happy -- as opposed to now where the Pirate faithful would be happy with a season without 100 losses -- this card has a grim reminder of a very large loss. Sitting in the front row, the third player from the right is Roberto Clemente. It's one of two cards in the first series that remind fans about the fragile nature of our very existence.

Other notable players in the photo are Willie Stargell (center of the back row), wild man Dock Ellis ( also in the back row) and Bill Mazeroski (seated in the front row), who was playing his final season and appears in the '73 set on a card with manager Bill Virdon.

The loss of a leader like Clemente was sure to affect the Pirates, but they did their best to make him proud. The final team record in '73 showed a 80-82 finish, but the division race was a wild ride that season. While beginning the season in first place, they slipped to last place in June and were 11 games back before rallying to take the lead again in the second half. However, the New York Mets were able to catch them on September 20th and hold the lead. As amazing as the Pirates were in handling their adversity, the Mets did what was thought to be impossible.
Posted by Chris Stufflestreet at 8:30 AM