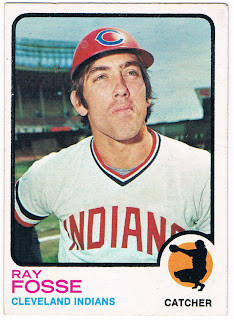 Card #226 -- Ray Fosse, Cleveland Indians
The first year of the draft was 1965, and the Tribe took Fosse in the first round. In 1972, he was credited by Gaylord Perry as a big help to his Cy Young award-winning season. He actually played the 1973 season in Oakland, after being traded a few days before Opening Day. He would go on to win two Series rings with the A's before returning to the Indians in '76, finishing the Mariners' inaugural season a year later and finishing with the Brewers in 1979.

Few references to Ray Fosse go by without mentioning the 1970 All-Star Game, when Pete Rose scored the winning run in the 12th inning by barreling over Fosse like a linebacker to beat the throw. Sure enough, the game is mentioned on the back of this card. However, the incident usually gets given the "he was a great prospect until..." treatment but he managed to stay in the game for much of the rest of the decade despite the incident.

While the Rose hit separated his shoulder, he managed to get injured later on by other means: an on-field brawl in '71, breaking up a fight between Reggie Jackson and Bill North in the A's clubhouse in '74, another home plate collision (with Jim Rice) in '75 and tripping in a hole during spring training in '78 that required season-ending reconstructive surgery. That may seem like a lot of injuries, but it's also evidence that Ray Fosse was definitely one tough hombre.
Posted by Chris Stufflestreet at 8:30 AM