This man had a career day in 1972, the same year this picture was taken: 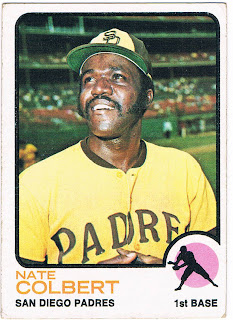 Card #340 -- Nate Colbert, San Diego Padres
On August 1, he hit five home runs in a doubleheader, tying a major league record. He also managed to drive in 13 runs. That broke a mark set by Stan Musial in 1954 (when he became the other player who hit 5 home runs in a twinbill). In an interesting bit of synergy, Colbert -- a St. Louis native -- was supposedly in the stands to watch Musial play those games.

Though he came up with Houston in 1966 and again in '68, Colbert became known when he joined the Padres for their inaugural season. Playing in San Diego through 1974, he was often the one bright spot in a lineup so bad that one day team owner Ray Kroc apologized to the fans over the public address system for their ineptitude. From 1968-1976, Colbert played on nine consecutive last-place teams.

Though back problems forced him to retire at age 30 in 1976 and the fact that he played for three different teams in his last two seasons, he is still the Padres' all-time home run leader.
Posted by Chris Stufflestreet at 8:30 AM