1972 was this player's first year with the Reds: 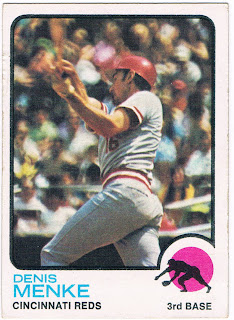 Card #52 -- Denis Menke, Cincinnati Reds
Denis Menke helped get the team to the World Series as the team's regular third baseman. He played every game in the postseason as well, hitting a homer in that Series. However, that dinger was one of only two hits he managed in 28 plate appearances. That's not to suggest he cost the Reds the Series; his glove was more valuable to the team and he didn't make any mistakes in the field.

Look at the crowd behind him in the photo. The spectators appear to be melting away, like a bad acid trip or a salute to Edvard Munch's The Scream. Several cards in the 1974 Topps set exhibit this type of effect (Jim Palmer, for instance), but not many in '73 did.

1973 would be Menke's final year with Cincy. He came up in 1962 when the Braves were still playing in Milwaukee. After moving with the team to Atlanta in '66, he was traded to Houston after the '67 season. Four years later, he was traded to Cincinnati in the deal that also brought Joe Morgan to the Big Red Machine. He would return to the Astros in 1974 and played his final game that July.

After retiring, he became a minor league skipper and a big league coach. Ironically, a guy who hit .250 over his career in the majors became a longtime hitting coach, taking another World Series trip with the Phillies in 1993 in that capacity. He eventually returned to the Reds as a bench coach from 1997-2000.
Posted by Chris Stufflestreet at 8:30 AM