A great way to endear yourself to the Fenway faithful is to stay with the Red Sox for your entire career. It may not seem like a common occurrence now, but the truth is, it's never been that way. For every Yaz, Teddy Ballgame (let's forget he managed elsewhere) and Jim Rice, there are plenty of guys like Boggs and Clemens, who went over to the Dark Side to get their Rings. Even Dewey Evans and Freddy Lynn went elsewhere before they were done. And Carlton Fisk, though I suspect BoSox fans don't fault him for moving over to those "other" Sox after the treatment he got from Management.

Then there's this guy: 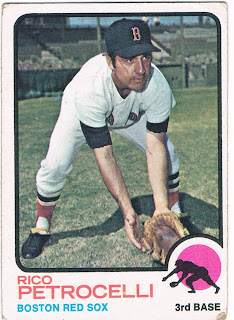 Card #365 -- Rico Petrocelli, Boston Red Sox
Rico Petrocelli played 1,553 major league games between 1963 and 1976. Every one of those was in a Red Sox uniform. During the "Impossible Dream" '67 World Series, he crushed two important home runs for the team. When Luis Aparicio came to the Sox in 1971, Petrocelli moved over to third even though he'd been among the league's best shortstops. In 1975, hit hit .308 in another World Series. To the fans, he was special.

And I'm a Yankee fan saying this.

Despite my own team affiliation, I'm a fan of baseball. Guys like Rico Petrocelli...and Bobby Doerr, Dom DiMaggio, Ted Williams, and Carl Yastrzemski, they're a part of the game's rich history. Even guys whose careers were changed by tragedy (like Harry Agganis and Tony Conigliaro) have their stories. But guys who play their hearts out in front of the home fans will always be welcome at their ballparks, and the fans at Fenway were damned lucky to have such players on the field. They knew that, too.

But those players were just as lucky to have those fans.
Posted by Chris Stufflestreet at 8:30 AM