Sometimes a picture can tell quite a story. Sometimes, there's an altogether different story to tell. That may be quite cryptic to say, but here goes: 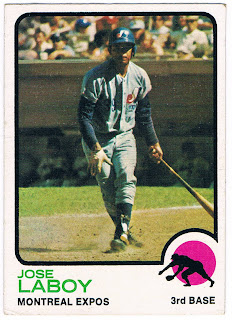 Card #642 -- Jose Laboy, Montreal Expos
The disappointed look on Laboy's face tells you that he missed the ball. However, it was a common expression for a guy who hit .233 for his career. I'd like to point out the way the Mets dugout shows up in the background. If this picture was taken in 1972, it would have been on July 30. It was the only game he played that year at Shea Stadium. In the game, he came up in the ninth as a pinch hitter and struck out to end the game. He then went back to the minors for a while.

That wasn't the story, though. "Coco" Laboy signed his first pro contract in 1959 but never managed to get past the minors until the leagues expanded in 1969. He became an original member of the Montreal Expos and had an excellent rookie campaign that season. After that, the opposing pitchers realized that not feeding him fastballs would neutralize him, and that dropped his average below .200. An injury in 1971 made matters worse. As it turned out, 1973 would be his final season in the majors. This card appeared in the high-numbered series late in the season, shortly before Laboy played his final game.

"Coco" Laboy was the cousin of Pepe Mangual (an Expos teammate) and Angel Mangual. After baseball, he returned home to Puerto Rico and took a job with the government. Before he retired, he was in charge of the athletic programs across the Commonwealth.
Posted by Chris Stufflestreet at 8:30 AM