Here's a Guy We All Know

Today's entry features a guy who recently stepped down as manager for the Los Angeles Dodgers: 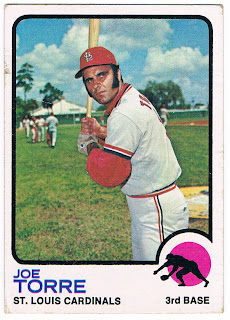 Card #450 - Joe Torre, St. Louis Cardinals
Torre looks like he's getting ready for a game at a neighborhood park. You can see his teammates getting warmed up in the back, and a building just beyond the outfield fence that looks a lot like one of those covered areas for picnics.

Torre's second career, it seems, has overshadowed his first. As a catcher first baseman and third baseman (as shown here), Torre was a nine-time All-Star and the National League MVP in 1971. It has been said that he was a good enough player to have an outside shot at making the Hall of Fame, but the road that began in 1977 would make that a moot argument. While being named the Mets' manager in 1977 while he was still an active player -- he retired 18 games later to focus on leading the team -- he went on to become the fifth-winningest manager in major league history. While detractors point out Torre's limited success with the Mets and Cardinals, it's worth noting that he brought the Braves to their first consecutive winning seasons after they moved to Atlanta, as well as winning two division titles in his first two years in Los Angeles. However, the discussion of Torre's leadership will center around his 12 years in charge of the Yankees.

Some argue that anybody could have led that team to success. However, Torre was able to do what thirteen other managers couldn't: build a sustained and successful franchise while dealing with George Steinbrenner's edicts and the New York press corps at the same time. For all the detractors, it's worth noting that the Yankees had been playing the free agent talent search for as long as Steinbrenner had owned the team and none of his predecessors could get the results Torre did.

Now that he's given up his position as the Dodgers' manager, he'll be rumored for nearly every new job opening that comes up for a while. Although there may be some more history to write before Torre's career is over, it's a safe bet he'll be on a bronze plaque in Cooperstown once he's eligible.
Posted by Chris Stufflestreet at 8:30 AM