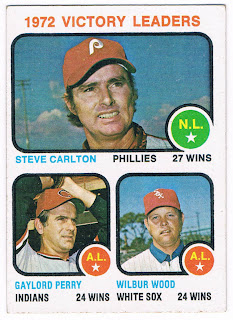 There are four leaders cards with pitching stats in the set, and Steve Carlton shows up on three of them (the other one was for the top relievers, so Carlton wasn't going to appear on that one anyway). But the fact that he shows up on all three cards as the National League's best pitcher really doesn't give the full story of how great his 1972 performance was.

With more than 300 strikeouts and an ERA below 2.00, "Lefty" enjoyed a tremendous season by anybody's yardstick. Furthermore, the 27 wins shown above were nearly half of the 59 games Philadelphia won that season, so he was often forced to work in games where he received little run support. Even more amazingly, that record was despite the fact that Carlton suffered a streak from May to June where he lost five straight decisions. Following that streak with another, he notched 14 straight wins until his next loss in August. He was one of very few bright spots in a very dismal season for the Phillie faithful.

Similarly, Gaylord Perry enjoyed a surprising season in 1972. After ten years pitching for the San Francisco Giants and helping them to the playoffs in 1971, the team traded him to Cleveland in favor of "Sudden" Sam McDowell. Undaunted, Perry went on to win 24 games for his big brother's old team and won the Cy Young Award. He remained the team's top ace through 1975, winning 39 percent of all Cleveland wins during his time there. Sadly, the team couldn't pull itself out of the second division despite his best efforts.

For Wilbur Wood, 1972 was only his second season as a starting pitcher after several seasons in the bullpen. He made it count, winning at least 20 every year from 1971-'75. His signature pitch was the knuckleball -- which he learned from Hoyt Wilhelm -- and was one of the hardest pitchers to hit (or catch) against during the early 1970s. Although he would go on to win 24 again in '73, he lost 20 as well, which made his the last pitcher in the American League to both win and lose 20 games in a season.

(Thanks to Night Owl for the subtle but very accurate correction in italics above.)
Posted by Chris Stufflestreet at 8:30 AM