The 2010 World Series is set to begin tonight, with the Texas Rangers making their first ever appearance there in the 50 years of the franchise's existence. However, they are going up against the San Francisco Giants, team that last won the Word Series in 1954, when they were still playing at the Polo Grounds in New York...and the Texas Rangers weren't yet the Washington Senators, as there was a different team of Senators in D.C. (now the Minnesota Twins). Confused? Don't be.

So, today's card features a scene from the 1972 World Series: 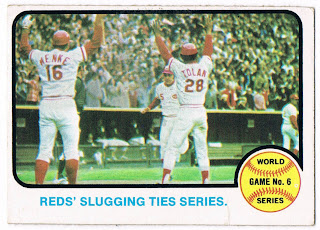 Card #208 -- 1972 World Series, Game 6
Game Six of the '72 Series was played at Cincinnati's Riverfront Stadium on October 21 (remember the days when the Series didn't go into November?). As the game started, the Reds were down 3 games to 2 and facing elimination by the Oakland A's.

It would be a scoreless contest into the fourth inning. Then, Johnny Bench took a Vida Blue pitch deep into left for a home run. This photo shows Bench coming home after that big hit, as teammates Bobby Tolan and Denis Menke (and the Reds fans behind him) celebrate. Third Base coach Alex Grammas is also seen in the shot.

The A's would tie the score in the next inning, but the Reds responded with a run in the fifth, another in the sixth, and five in the seventh. The 8-1 victory would set up another chance for the Reds to play for the title the next night in front of their home crowd.

(Edited to add...alert reader Don points out that this photo was actually taken when Bench scored again in the seventh inning, and that Tolan and Menke are actually signaling him not to slide into home. Looking at the lineup, Tolan was hitting ahead of Bench and scored on that same play in the seventh. He wouldn't have been at the plate after Bench's solo homer in the fourth. Having this play happen in a later inning better explains the expressions of Gene Tenace at the plate and the A's in the dugout; the game had pretty much slipped past them at this point. Thanks for the correction!)
Posted by Chris Stufflestreet at 8:30 AM