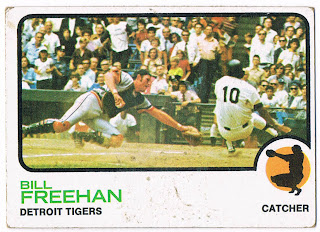 Card #460 -- Bill Freehan, Detroit Tigers
Great action photo. The runner is wearing pinstripes, which would mean Freehan is playing at Yankee Stadium and Celerino Sanchez is sliding. Freehan is lunging, with the ball in his hand for the tag, and the Bronx crowd is standing to see the result.

According to Baseball-Reference.com, this game took place on August 8, 1972. At the time, the Yankees were still in the A.L.East race, three games behind first-place Detroit. With a 4-game series between the two teams beginning that day, the Yankees had a chance to move closer to first. In the bottom of the fourth inning, Sanchez was hit by a Mickey Lolich pitch, sending him to first and moving Felipe Alou to second. Ron Swoboda followed and lined a single to left. Alou scored from second, tying the game 1-1. After Gene Michael flied to right for the second out, Fritz Peterson (remember, pitchers were still hitting in the American League in 1972) singled to left. Sanchez was ordered to round third and run home to take the lead.

Freehan got him. The inning was over, game still tied. The Yankees eventually won the game 4-2 and took three of the four games in the series.

Bill Freehan was a Detroit native who played with the Tigers for his entire career. One of the game's better catchers during the 1960s, he was a perennial All-Star and an important part of the 1968 World Champions. A quiet leader, he helped Denny McLain become the only pitcher since 1934 to get 30 wins. At the time of his retirement in 1976, he held the all-time record for fielding by a catcher. After hanging up the mask, he stayed with the Tigers and helped teach some of the finer points of catching to Lance Parrish. He returned to the University of Michigan as the school's head baseball coach between 1989-'95.

Sadly, Freehan's performance was overshadowed by Johnny Bench and Carlton Fisk during the 1970s so his numbers were overlooked by the Hall of Fame voters. But he's still a beloved figure when it comes to fans of the Tigers.
Posted by Chris Stufflestreet at 8:30 AM