Here's a guy who was still a workhorse when I was watching baseball in the 1980s: 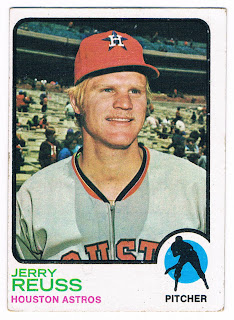 Card #446 -- Jerry Reuss, Houston Astros
Of course, by the time I was getting into baseball during the 1980s, Jerry Reuss was part of the Los Angeles Dodgers' rotation. Since I lived outside of the territory of any major league team (I was living in northern New York), I was at the mercy of whatever the TV stations I tuned in could get. Since NBC's Game of the Week was one of my ways to see baseball games, and NBC loved showing the Dodgers, I watched Reuss pitch a lot of games.

Thanks to Vin Scully on those weekend games, I learned the proper way to pronounce Reuss: sounds like "Royce." I had been rhyming it with "Moose" before that. While I realize he pitched with guys like Fernando Valenzuela, Bob Welch, Steve Howe and Orel Hershiser, he was but one of the many tools in Tommy Lasorda's arsenal (and I'm not using the word "tool" as a pejorative at all here), he showed up on the mound in enough games during my childhood to make me think he was the ace of their staff then.

In 1973, Jerry Reuss was in his second of two seasons with the Astros. He had been traded to the team before the '72 season from the Cardinals. He started a league-best -- and personal best -- 40 games that year and won 16 games. After that, he spent six years in Pittsburgh and nine with the Dodgers (where he threw a no-hitter in 1980) before finishing his career with a number of teams in the late 80s. He finished his career back in Pittsburgh in 1990. To give a perspective on how long he played, he is one of only a few pitchers to win 200 career games depite never getting 20 in a single season. He came very close some seasons, though.

From what I understand, Reuss is currently an amateur photographer and checks out the blogs frequently and even has stories about the pictures on his cards. So it may be nice that I left out the fact that he was 0-7 in the League Championship Series over his career. That way, he'll feel free to share wgat was going on during the game where this photo was taken. All I can tell is that he's wearing an Astros road jersey and the fans are just starting to make their way into the seats.
Posted by Chris Stufflestreet at 8:30 AM