Some parents place their kids' artwork on their refrigerators. Employees at Topps put them on baseball cards: 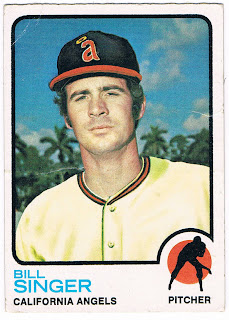 Card #570 -- Bill Singer, California Angels
Or at least that's what it seems like with some of the airbrush jobs they've featured over the years.

With the palm trees looming behind him, Bill Singer is obviously hanging around at a Spring Training facility (probably Vero Beach, the long-time preseason home of the Dodgers, Singer's team through the end of 1972). It's quite obvious that he wasn't wearing a California Angels outfit when the photo was snapped.

While with the Dodgers, Singer was a member of the team's rotation during the late 1960s. In 1969, he won 20 games; in 1970, he threw a no-hitter. Unfortunately,  he developed some injuries that limited his time on the mound.

After the 1972 season, the Dodgers sent him to their Anaheim neighbors along with Frank Robinson and Bobby Valentine to get Andy Messersmith. Singer earned 20 wins for the Halos in '73 and appeared in the All-Star game that season. However, injuries continued to affect him afterwards and he would travel to the Rangers, Twins and Blue Jays before hanging up the glove in 1978. In Toronto, he was part of history as the team's first-ever Opening Day pitcher.

After retiring, Singer went on to coach and scout for various teams. He would show up in the news again in 2003, after making some insensitive remarks to Dodgers' assistant GM Kim Ng about his her Asian heritage. Singer was quick to use the "I was drunk" defense, but the Mets quickly tossed him to the curb when the story surfaced. Singer would soon work for the Arizona Diamondbacks, but in an interesting bit of irony given the reason he was canned by the Mets, the Washington Nationals would later give him a job coordinating their scouting efforts in Asia.
Posted by Chris Stufflestreet at 8:30 AM