Many collectors know that the 1973 Topps baseball set was the company's last set issued in several series throughout the year. Along with the wax packs of cards from the final series that year, team checklists appeared, including this one: 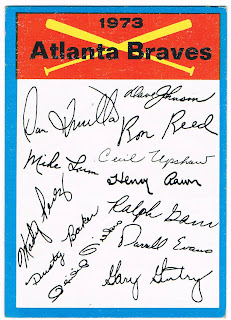 (no number) -- Atlanta Braves Checklist
I'm struck by how neat and clear the penmanship is on the card. The two biggest names are the team's two Hall of Fame players: Henry Aaron and Philip Niekro. Also shown are Dave Johnson, Mike Lum, Dan Frisella, Ron Reed, Cecil Upshaw, Ralph Garr, Dusty Baker, Marty Perez, Darrell Evans and Gary Gentry. The starting lineup is short a catcher, though.
Posted by Chris Stufflestreet at 8:30 AM