Back in September, I featured this card of Mike Andrews and started a bunch of debate over who was sliding. In fact, that post is still the one with the most comments on this blog to date. 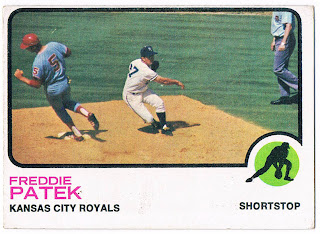 Card #334 -- Freddie Patek, Kansas City Royals
Both cards show the same "rolled out turf" look on the field. This is undoubtedly the same place (and most likely the same game) as where Andrews was making the play in his card. Therefore, Mike Andrews and the White Sox would be playing against the Royals at Municipal Stadium in Kansas City (which -- oddly -- was a natural grass field). And Bob Oliver was the person sliding into second.

That leaves one other question: is the White Sox baserunner Tony Muser or Ed Spezio? Both wore #5 for the ChiSox in '72. The answer, as it turns out...is, "I don't know." Since Bob Oliver was dealt to California early in '72, he never played in any game against the White Sox in a Royals uniform Royals that year. So, we go over to 1971. And there doesn't appear to be a single game where Oliver, Patek and Andrews played together. Going back to 1970 won't do any good, as Patek was still with the Pirates then. Therefore, this game was either an exhibition or perhaps one that was called on account of rain. Thos games are in the great stuff to be found at Baseball-Reference.com.

Despite being an excellent fielder, Fred Patek was known as the shortest player in the league. While Patek understood that being the shortest player in the majors was better than being the shortest person in the minors, it still followed him around. When I was in elementary school during the late 1970s, I remember seeing his name as a trivia question due to his height. But, as a culture that admires when the little guys win (even as they cheer on the Goliaths), Patek was good at little things like bunting, running and fielding so the fans admired the way he carried himself on the field.

Even regular-sized guys might not really like the idea of someone like Frank Howard or Don Baylor sliding into second with their cleats pointed at them, trying to break up the double play.
Posted by Chris Stufflestreet at 8:30 AM