On Wednesday, I featured one legendary "Sparky." Today, it's only fitting to show another: 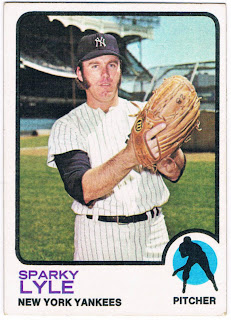 Card #394 -- Sparky Lyle, New York Yankees
Shown here standing in front of Yankee Stadium's famous facade, Albert "Sparky" Lyle was picked up by the Yankees before the 1972 season in one of the more famous one-side trades in history. The Yankees got a valuable piece of the puzzle that helped them win three pennants and two World Series, while the Red Sox picked up two players (Danny Cater and Mario Guerrero) who would be gone after the 1974 season. Lyle's presence in the bullpen of the BoSox' A.L. East rivals was certainly noted whenever the walked to the mound and beat them in ensuing years.

In the days where relief pitchers didn't put up the gaudy numbers they do today -- when they were sometimes expected to come in as early as the second or third inning if needed and pitch more than an inning or two -- Sparky was one of the best in baseball. He was the first American League southpaw to collect 100 saves, setting a league record with 35 in '72. He would go on to become the first relief pitcher to win the A.L. Cy Young Award in 1977; however, George Steinbrenner picked up Rich Gossage after the season, which limited his role in '78. He responded by writing one of baseball's great books, The Bronx Zoo, which chronicled the ups and downs of that '78 season: Ron Guidry's breakout season, Billy Martin's fall from grace, the amazing comeback and the day Bucky Dent was given a brand new middle name by fans of the Red Sox.

After that '78 season, Sparky was traded to the Rangers, which made Graig Nettles say he went "from Cy Young to sayonara." He would go on to the Phillies in 1980 (but too late to appear in the World Series that year) and finished his career with the Chicago White Sox in '83. When he retired, he was the all-time best left-handed reliever in baseball. Despite the bigger numbers put up by relief pitchers since 1990, Sparky still owns the A.L. mark for saves by a lefty.

Sparky Lyle is also remembered by teammates and fans for being a practical joker. One of his signature pranks was to sit naked on a birthday cake so the imprint of his buttocks was left in the icing. Beginning that unusual talent in Boston, his first "victim" was Ken Harrelson, who had been given a cake shaped like Fenway Park. Shortly after being traded, he quickly managed to make his "mark" there, on a cake that turned out to be delivered to manager Ralph Houk. Teammate Ron Swoboda eventually went to the disgusting extreme in a cake that was then sent to Lyle himself. Finally, Sparky said in The Bronx Zoo that he eventually gave it up because of the notoriety he gained, figuring somebody would stick sharp objects into cakes to hurt him.
Posted by Chris Stufflestreet at 8:30 AM