Another "Impossible" Made Possible

Thanks to airbrushing, Topps could design cards that showed amazing feats...things that just couldn't happen. Like this card: 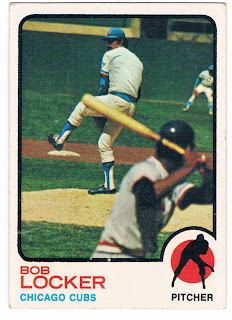 Card #645 -- Bob Locker, Chicago Cubs
Bob Locker appears to be wearing a Chicago Cubs uniform and is getting ready to deliver a pitch to...a Texas Ranger? In 1972, there was no interleague play. If you look closer, you'll see that the Cubs outfit has been painted on. The original uniform (including cap and stirrup socks) has also been painted white, its number removed, a "Cub" patch added to Locker's left sleeve...and look over toward that guy in the outfield. His uniform looks day-glo bright from being airbrushed, and the artist even painted a large "C" on his chest.

The back of the card mentions that Locker was a member of the A's in 1972 and had been traded during the offseason. He was traded in exchange for Bill North (featured here last June). Before the trade, Locker told A's owner charlie Finley that he wanted to come back to Oakland after one year in Chicago, which would allow him to keep his family from being uprooted. Despite a decent season relieving for the Cubs in 1973, Finley worked out an arrangement and got him back. This would lead to a Topps Traded card in '74; since he was returning to a team he'd already played for, it may be the only card in teh Traded set that year that wasn't airbrushed. However, surgery kept Locker from playing in '74. So, he would be traded back to the Cubs (this time, for Billy Williams) and played one final season in '75.
Posted by Chris Stufflestreet at 8:30 AM