My last post featured a Cubs pitcher who seemed to be playing against a Texas Ranger. Today is another take on the concept and it also involves the Cubs: 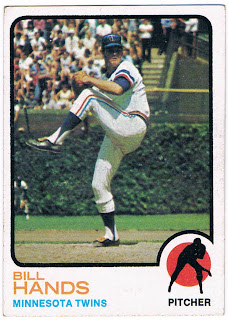 Card #555 -- Bill Hands, Minnesota Twins
This is actually a pretty decent airbrush job, one that nearly isn't as obvious as some of the others featured on this blog. However, the ivy wall behind him shows he's pitching in Wrigley Field. While Bob Locker's card in the other post featured an outfielder whose uniform was also airbrushed, an eagle eye on the outfielder behind Hands can pick out a distinct letter "C" on his cap.

The back of the card gives an explanation, saying that Hands had been traded to the Twins in the off-season. The Cubs sent him and Joe Decker in exchange for Dave LaRoche. As a Cub, Hands had been part of the rotation, winning 20 games in 1969 but seeing his numbers decline after that. He would split '74 with the Twins and Rangers, and play his last season with Texas in '75. He was traded to the Mets before the '76 season but never played for them.
Posted by Chris Stufflestreet at 8:30 AM