Here's a pitcher who was one of the hardest-throwing hurlers of the 1960s: 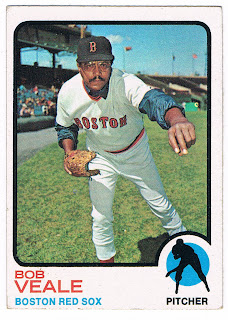 Card #518 -- Bob Veale, Boston Red Sox
Bob Veale finished the 1972 season with Boston after eleven years in Pittsburgh. He still holds the Pirates' single-season strikeout record with the 276 he notched in 1965. He won the 1964 National League K title in dramatic fashion, beating out Bob Gibson on the final day of the season. While with the Pirates, he was part of a rotation that included (Bob) Moose, (John) Lamb and Veale.

He was sold to the Red Sox on September 2, 1972. Interestingly, Topps was able to get a picture of Veale in his new uniform in the short month he spent with his new team when they weren't always able to get updated photos for other players who had spent most of '72 on their new teams. The picture appears to be a late-season shot at Fenway Park, with Veale wearing a windbreaker under his home uniform (see below for the reason those were struck out). Veale would remain with the Red Sox as a reliever through 1974.

(Edited to add: A couple of comments below brought up a couple of corrections to the original post. First, the picture appears to have been taken at Memorial Stadium in Baltimore. Secondly, even though he wears a white jersey, it says "Boston" across the front. The Red Sox used the city name on their road uniforms. Thanks for the corrections!)
Posted by Chris Stufflestreet at 8:30 AM