Where to begin with this card? Let's start with the skipper: 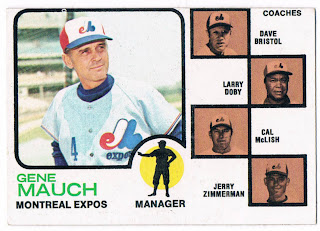 Card #377 - Gene Mauch and Coaches
Gene Mauch was the original manager of the Montreal Expos, beginning in 1969. it was the second of four teams he managed over a 28-year span. He holds the record for the longest managerial career without winning a pennant. It wasn't because he had the chance, however. In 1964, his Phillies led the league by six and a half games with only 12 to go. They lost all but one of those final games, a collapse that still brings sadness to Philadelphia fans today. He also led the California Angels to within one game of the World Series not once but twice (1982 and 1986), with the '86 playoffs the real tragedy. Mauch's team was only one strike away from winning the pennant before Dave Henderson took Donnie Moore's pitch long. Gene Mauch retired due to poor health before the 1988 season and passed away in 2005.

Dave Bristol never played in the majors, but was familiar to fans and card collectors in the 1960s as the manager of the Cincinnati Reds. When he took over that position, he was only 33 years old. He would be replaced by Sparky Anderson in 1969. He was then hired by the Seattle Pilots for 1970, only to be told six days before Opening Day that they were going to move to Milwaukee. He led the Brewers into 1972. Later, as the manager of the Atlanta Braves, Bristol would be replaced for one game as manager by team owner Ted Turner before Bowie Kuhn forced a reinstatement. He would also manage the Giants in 1979-'80.

Larry Doby was a star for the great Cleveland Indians teams of the late 1940s and early 1950s after several seasons in the Negro Leagues. While largely remembered as the first black-skinned player in the American League, he was an important cog in those Tribe teams that won the 1948 World Series and the '54 A.L. pennant. In an interesting coincidence, he would also become the second black manager when he took over the Chicago White Sox in 1978. He would be elected to the Hall of Fame in 1998, and passed away in 2003.

Cal McLish was a pitcher who played for seven teams over 15 years. He is probably better known for his full name: Calvin Coolidge Julius Caesar Tuscahoma McLish. He would be the pitching coach for the Expos from their inaugural season through 1975. McLish passed away this August.

Jerry Zimmerman was also one of the original Expos coaches. He served as their bullpen coach from 1969-'75 after a career playing mostly backup catcher for Cincinnati and Minnesota. He passed away in 1998.
Posted by Chris Stufflestreet at 8:30 AM