Today's card features a Hall of Famer who recently passed away: 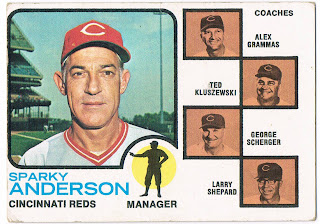 Card #296 -- Sparky Anderson & Coaches, Cincinnati Reds
Sparky passed away on November 4, only a day after it was reported that he was seriously ill.

Sparky's Hall of Fame career started out inauspiciously enough. He was given the starting second baseman's job for the 1959 Phillies. After hitting .218 with no home runs and only 34 RBI's in 152 games, he was sent back to the minors for good. He stopped playing in 1964 but stuck around as a manager. In 1970, he was named the new skipper of the Cincinnati Reds. While there were the expected naysayers who come out whenever an unknown person is given such a job, he quieted them down his first year by winning the National League pennant that year. More pennants followed in '72, '75 and '76, with the Reds also winning the World Series those last two years. That 1976 postseason was especially sweet, as the Reds won every game they played. When he was fired after the 1978 season, he was quickly hired by the Tigers. He won another World Series title in 1984, making him the first manager to win a World Series in both leagues. He retired after the 1995 season and was inducted into the Hall of Fame in 2000.

It's worth noting that Sparky turned 39 in 1973. He looks much older than that in the picture.

Alex Grammas is one of two ex-managers of the Pittsburgh Pirates on this card. After playing mainly as a reserve infielder between 1954-'63, he would become a long-time coach. He managed the Pirates in 1969 and the Milwaukee Brewers from 1976-'77. After Sparky Anderson moved to Detroit, Grammas would coach there as well.

Longtime baseball fans and card collectors need little introduction to Ted Kluszewski. "Big Klu" was a feared slugger with the Reds, Pirates, White Sox and Angels who also hit for a decent average. Unlike many longball hitters, Kluszewski wasn't an easy out; over his career, he walked more often than he struck out. In 1955, he became the last player to hit 40 home runs and strike out less than 40 times. He famously cut the sleeves off his Reds uniform because it constricted  his swing (his iconic 1957 Topps card shows this). After his playing days were over in 1961, he became a hitting coach. He remained with the Reds until 1986, when failing health forced his retirement. He passed away in 1988.

Pete Rose -- whose baseball mind was incredibly sharp even if his off-field life wasn't -- called George Scherger the "smartest baseball mind in the world." That's quite a compliment. Scherger never made the major leagues as a player, but managed Spark Anderson in the Brooklyn Dodgers' system during the 1950s. He stayed in Cincinnati after Anderson's dismissal and was a coach under Rose until 1986.

Larry Shepard never made the majors as a player, but was setting himself up for the future as a playing manager in the minors. The Pirates named him their manager in 1968. He joined the Reds as a pitching coach in 1970 and stayed there through Sparky's tenure. In 1979, he would spend one season as the Giants' pitching coach before retiring.
Posted by Chris Stufflestreet at 8:30 AM