Here's a nice action shot from the 1973 Topps set: 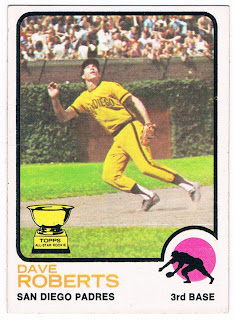 Card #133 - Dave Roberts, San Diego Padres
San Diego third baseman Dave Roberts is getting ready to grab a pop fly. Getting himself into position, he's keeping his eye on the ball and moving in for the kill. But that's not exactly what focuses the eye on the picture.

There's the Ivy-covered Wrigley Field wall, the capacity crowd of Cub fans in the background and a golden trophy in the corner, but none of that seems to distract any attention from that Padres road uniform Roberts is wearing. Having a color that is part hot mustard, part 1970s-era household appliances. It's eye-catching for all the wrong reasons (something Fleer would later learn with its 1991 design).

There have been four baseball players named Dave (or David) Roberts. One was a first baseman in the 1960s and another was an outfielder between 1999 and 2008. The other two both appear in the 1973 Topps set; one was a pitcher and one a third baseman. The pitcher hasn't been featured in the blog yet, but the fact that both played and appeared in Topps sets through 1981 and even played for the Padres at different times has caused some confusion over the years.

This was the first appearance of Dave Roberts on a Topps card (the All-Star trophy wasn't always a dead giveaway). He was signed by San Diego out of the University of Oregon in 1972 and was immediately installed as the team's regular third baseman. There was no seasoning time in the minors for him, as he played his first game the same day he signed his contract. The position wasn't assured, though, as he would take several trips between the majors and minors beginning in 1973. The Padres eventually gave up on him in 1979, trading him to Texas. After a couple of years with the Rangers and one each with the Astros and Phillies, his career was over in 1982.
Posted by Chris Stufflestreet at 8:30 AM