Sorry for the bad pun in the title. It would have been perfect if the player was also a Navy veteran.

Here's a great picture, with the ivy-covered Wrigley Field walls as a backdrop: 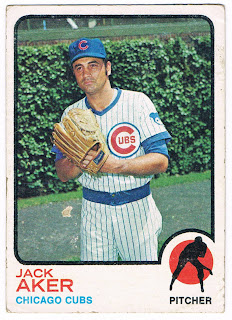 Card #262 - Jack Aker, Chicago Cubs
Aker appears to be warming up for a possible trip to the mound (even if he's just posing for the Topps photographer). While it looks like the stadium's grounds crew was on strike that day, it's because of a little missing paper on my card. I do like the Cub logo patch on Aker's right sleeve, though.

Jack Aker was a closer in an era where they received little respect. He pitched in 495 games between 1964 and '74 but never started one. Instead, he was sent out late in the game, either to try and get the win at a stressful moment or to mop up when the starter had no gas left. In those days, closers' roles were appreciated by managers and fans who understood the finer points of the game, but casual fans (and baseball card collectors) were likely to see them as pitchers who couldn't last an entire game. It was a different time indeed.

Aker had come to the Cubs in 1972 after stints with the A's, the expansion Seattle Pilots and the New York Yankees. 1973 was probably his worst season statistically, so Aker split the '74 season between the Mets and Braves before managing in the minor leagues beginning in 1975. He later served as pitching coach for the Cleveland Indians.

In Jim Bouton's book Ball Four, Aker was mentioned as the Pilots' union representative due to his experience dealing with A's owner Charlie Finley during his days with that team. Bouton added that he was elected unanimously. The position didn't last long, as he was traded to the Yankees on May 20th of that year.
Posted by Chris Stufflestreet at 8:30 AM