Look at the Vet

This is a nice shot of Tommy Hutton on thefield at Veteran's Stadium in Philadelphia. The angle and perspective give the feel that he's larger than life, similar to the way the players are shown on 1933 Delong cards. 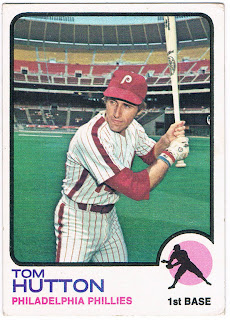 Card #271 -- Tom Hutton, Philadelphia Phillies
Tommy Hutton is better known today as a baseball announcer, but he played from 1967 through 1981 for four different teams. He had short stints with the Dodgers in 1967 and '69 but never had the chance to play regularly there and was traded to Philadelphia after the '71 season. During his Phillie days, he was renowned for his ability to hit well against the Mets' Tom Seaver. In 1977, he played for both Canadian teams, first as an original Blue Jay and then with the Expos, the team he would remain for the rest of his career. His broadcast career started when he retired.

One last thing...Hutton was named to the 1972 Topps All-Star Rookie team but was not given the trophy icon on his card. While this can be explained by the fact that Hutton had a "Rookie Stars" card in the 1967 Topps set, that's really not an adequate reason, considering Lou Piniella had been featured on three multi-player rookie cards between 1964 and '69 and still had a trophy on his own 1970 Topps card.
Posted by Chris Stufflestreet at 8:30 AM