This card is part of a subset in the 1973 Topps set featuring the all-time leaders in several batting and pitching categories. This is an amazing record, even today. 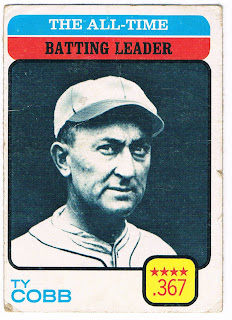 Card #475 - Ty Cobb, All-Time Batting Leader
The picture shows Ty Cobb late in his career, when he was a player/coach for the Philadelphia A's. Today, a .367 season average would be considered a feat -- it was last surpassed by Ichiro Suzuki in 2004 --  and Cobb managed to do that over a 24-year career. He hit over .400 three times, including one season (1922) when a .401 average wasn't good even enough to lead the league.

Take a look at the back of this card as well: 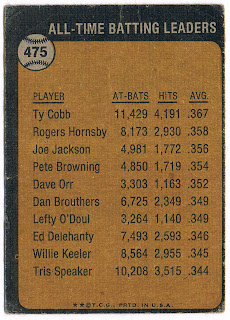 What's interesting is that there are some names here that aren't well known to even devout baseball fans today. Pete Browning and Dave Orr were 19th century players who aren't in the Hall of Fame due to short careers (though Browning still has an outside chance to squeak in someday). Two other names on the list aren't in the Hall of Fame either: Joe Jackson, whose exclusion was ordered due to his alleged part in the 1919 World Series fix, and Lefty O'Doul, who only played six full seasons.

There must have been some re-evaluation of the record books, as Baseball-Reference.com has a slightly different Top 10 list:

In the revised list, Orr has fallen to 11th, Browning to 13th and Keeler to 14th. That leaves Shoeless Joe and O'Doul as the only two non-Hall of Fame players on the list.

Since there haven't been any additions to the list (in fact, all the others were done playing in the majors before Williams even took his first big league swing) and the guys listed haven't had any at-bats since this card was printed to change their numbers, it must be assumed either that Topps was working with incomplete records or new information has developed that changed the numbers. For instance, it was later learned that Cobb had been given credit for two hits that were later disallowed, which explains why his average now shows as .366 instead of the .367 mark given on the card.
Posted by Chris Stufflestreet at 8:30 AM