If Looks Could Kill...

Sometimes you look at a picture and wonder what the person is thinking. Take this picture, for example: 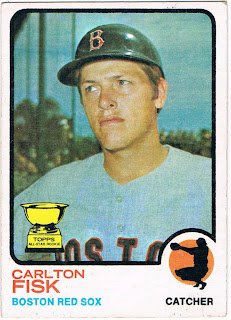 Card #193 -- Carlton Fisk, Boston Red Sox
No need to wonder whether Carlton Fisk is putting on a fake smile or just being polite, he certainly looks irritated that somebody is pointing a camera his way.Either that, or the photographer was asking him why he couldn't be as genial as Johnny Bench.

Although there's an All-Star Rookie trophy on the card, this wasn't Fisk's first Topps card. He shared a Red Sox Rookies card in '72 with Mike Garman and Cecil Cooper. Fisk had actually come up in 1969 but was required to fulfill a military commitment and had to wait until 1972 to prove he belonged. He did a pretty good job of it, winning the American League Rookie of the Year award. He became the Red Sox's regular catcher through 1980, solidifying his legend among the team's fans with an epic home run in the 1975 World Series. Winning the game in the 12 inning, the footage of Fisk willing the ball to stay fair as he watched it travel is still shown, making some fans almost forget that the Reds still won Game 7 the next night.

Although Fisk was a fan favorite for his drive and his gamesmanship, he was also a thorn in the side of Red Sox management when it came to salary issues, so the team allowed him to become a free agent in 1980. He ended up with the White Sox, where he spent another decade behind the plate. When he came to Chicago, his Red Sox uniform number (27) was taken, so he switched the digits around to 72 in commemoration of his rookie year and the birth of his son. He ended up having two different numbers retired by two different teams, one of only three players so honored.

Known as both "Pudge" and "Commander," Carlton Fisk was elected into the Hall of Fame in 2000. He was a consummate professional throughout his career.
Posted by Chris Stufflestreet at 8:30 AM