In Praise of the Backstop

1969 was almost a magical year for the Chicago Cubs faithful. Had it not been for the Miracle Mets, the Cubbies were poised to make the postseason for the first time since World War Two ended. Sadly, the Wrigley bleacher bums were denied and had to wait another 15 years to see a postseason game at their stadium.

The '69 Cubs had three Hall of Fame players (Ernie Banks, Billy Williams and Fergie Jenkins) and another who just might join them in Cooperstown (Ron Santo). However, the man considered the team's leader is a guy who'll never enter the Hall of Fame without buying a ticket: 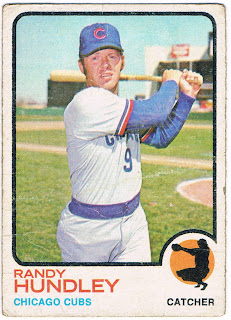 Card #21 -- Randy Hundley, Chicago Cubs
It's been said that the catcher is perhaps the most important person on the baseball field. Since he's calling the pitches, he controls the flow of the game. As the person who decides whether to have his ace throw a heater or try to get a batter to hit a weak grounder to force a double play, he's always thinking. Hundley was known among players as a capable defensive backstop who knew how to use his pitchers. As the late 1960s wore on, Hundley was an iron man behind the plate, catching at least 150 games each year from 1967-'69.

However, in 1970 he was injured in a home-plate collision with St. Louis's Carl Taylor. He was never the same. Injuries to his knees would keep bothering him for the rest of his career. In 1972, he would catch two no-hitters (by Burt Hooton and Milt Pappas), but 1973 would his last season with the Cubs before being traded to Minnesota. After a year with the Twins and another with the Padres, Hundley returned to Chicago for two more years but didn't get into a lot of games.

After retiring, Hundley began one of the first baseball "fantasy camps" that allowed fans to get a chance to suit up and play alongside professional players. His son Todd was also a major leaguer.
Posted by Chris Stufflestreet at 8:30 AM