Postseason Play at the Plate 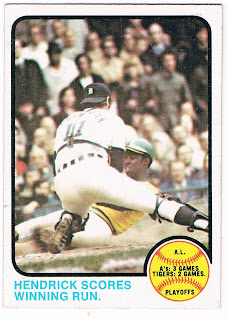 Card #201 -- A.L. Championship Series
In this picture, George Hendrick is scoring against Tiger catcher Bill Freehan. Unlike the winning run in the NLCS as shown on that card, this picture was taken in the 4th inning and there was still a long road before the game was over.

At the end of the '72 season, the A's won the American League West handily, but in the East there was a race to the end for the division crown. As the dust settled, the Detroit Tigers edged out the Boston Red Sox by half a game to win the crown. As the series began, the A's were heavily favored; they had the stars and the better record. At the core, these Tigers were different from the club that won the '68 World Series, but anything was possible with skipper Billy Martin.

The series started in Oakland and the A's won both contests there. Once the series moved to Detroit, the Tigers grabbed two games to tie the series and set up a winner-take-all fifth game on Thurday, October 12. The Tigers drew first blood in their half of the first when Dick McAuliffe capitalized on a passed ball and then scored on a groundout. The A's would tie the game in the second inning, when Reggie Jackson stole home. While Jackson scored, he tore his hamstring and ended his season. In the 4th, Jackson's replacement George Hendrick would score the run shown above to put the A's ahead. The two teams would battle for another five innings before it was over.

It would be the first time the A's would play in a World Series since 1931, when they were still playing in Philadelphia. For all the talk in '72 about the Pittsburgh Steelers finally won the first NFL playoff game in their 40-year history that year, this should give a little perspective: the last time the A's had been in a World Series, there was no NFL team in Pittsburgh.
Posted by Chris Stufflestreet at 8:30 AM