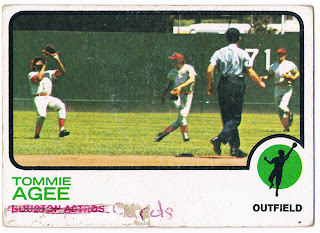 Card #420 -- Tomie Agee, Houston Astros
That's Tommie off to the left side of the photo, preparing to catch a shallow fly ball. You see the umpire holding out his right hand, getting ready to call the batter out but waiting for the catch before making it official. But something isn't right here...Met shortstop Buddy Harrelson is clearly seen right in the middle of the action. Agee and his former teammates have all been airbrushed to look like Astros, a team that Harrelson never suited up with.

Tommie Agee is perhaps best remembered as one of the sparkplugs of the 1969 Amazin' Mets and a hero of that year's World Series. Two tremendous catches by Agee in the third game of the Series saved five runs and were big blows to the Orioles' chances. In 1971 and '72, Agee developed chronic knee problems that hampered his abilities on the field. As the card above originally indicated, he was dealt to the Astros before the '73 season. In August, he was traded to St. Louis (also indicated on this card) and finished his season with the Cardinals.

Although Agee's major league career ended in 1973, he was given two Topps cards in 1974: a regular card showing him in his Cardinals uniform and a card in the Traded set that reflected his trade to Los Angeles after the '73 season. That card was airbrushed, as Agee never played with the Dodgers. Agee died of a heart attack in January 2001; he would be inducted into the Mets' Hall of Fame the following year.
Posted by Chris Stufflestreet at 9:40 AM