Here's a picture of a guy at the peak of his career: 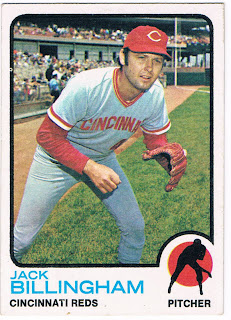 Card #89 -- Jack Billingham, Cincinnati Reds
Although the photo was likely taken as a quick sidelines shot, with the image it appears Billingham is about to take the field, with a great crowd behind him. Never mind that he's in a road uniform, he has the look of determination on his face and appears to be ready for whatever the other team tries to do with their bats.

1973 would be a great year for Jack Billingham. He won 19 games, led the league with 7 shutouts, was named an All-Star for the only time in his career and was the ace of a team that would finish with the best record in the majors. He also posted career-best strikeout and ERA totals that year.

In 1974, Billingham would toss the pitch that Hank Aaron sent into the seats for the home run that tied him with Babe Ruth on the all-time home run list. Fortunately for him, fans forgot all about that pitch four days later, when Al Downing threw the pitch that broke the record. He would go on to help the Reds win back-to-back titles in 1975 and '76. He pitched in Cincinnati through 1977, went to Detroit and then finished his career with the Red Sox in 1980.

This was one of several Topps cards that mentioned that Billingham was a cousin of Hall of Famer Christy Mathewson.
Posted by Chris Stufflestreet at 8:30 AM