Last week marked the anniversary of the 1979 plane crash that killed Yankee catcher Thurman Munson. My other blog ran a tribute last Monday that's worth reading if you missed it. Rather than showing off Munson's card, I'm featuring another Yankee backstop today.

Catcher is a physically demanding position, so most teams have three of them on the roster. When Munson needed the day off, Gerry Moses was his primary backup in '73: 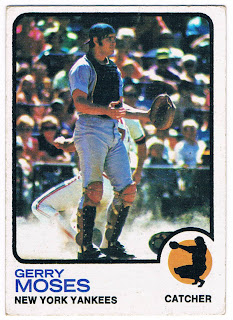 Card #431 -- Gerry Moses, New York Yankees
Gerry (both Wikipedia and Baseball-Reference.com refer to him as "Jerry" even though Topps didn't spell it that way until '75) Moses was beginning the year as a new Yankee, so the picture here shows him with another team. He spent '72 with Cleveland but since they wore red caps in '72 it's likely the picture was from his 65-'70 tenure with the Boston Red Sox. His '71 team was California but the picture can't be from that year, as it appears an Angel is crossing the plate.

Despite the bemused look on his face as an opponent scores on him, the back of Moses's card mentions that he was a "fine defensive catcher," which is a polite way of saying he wasn't much of a hitter. Despite having a good glove, it seems he wasn't able to stick with any club for long. The 1973 Yankees were the fourth team in as many years to feature him on their roster, but Moses would spend '74 with Detroit and split '75 between the Padres and White Sox before being released.
Posted by Chris Stufflestreet at 8:30 AM