I've been a baseball fan for over 30 years and have observed that fans of certain teams have similarities. Yankee and Red Sox fans are perhaps the most noticeable, Cubs fans live with a century-old streak of bad luck. Among other teams, I've found that fans of the Cardinals and Tigers are perhaps the most loyal and underappreciated in the game. They are also some of the most knowledgeable fans I've encountered when it comes to baseball history and tradition.

That said, Tigers fans also tend to make it tough for me to complete baseball card sets. It seems that when I have a set wantlist that has dwindled to about 20-25 cards, an inordinate number of the commons I still need tend to be Tigers. It also means that I end up with cards like this one that exhibit a flaw: 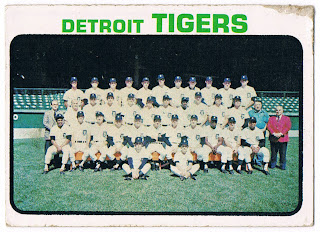 Card #191 -- Detroit Tigers Team Card
The 1973 Tigers would finish with a winning record but finished third in the American League East (their division at the time). After winning the division in '72, it was considered a disappointing season. Manager Billy Martin was fired in August after making no secret of the fact he was ordering his pitchers to throw at opposing batters. Coach Joe Schulz (shown here sitting next to Martin) filled in as skipper for the rest of '73.

The team wouldn't be competitive in their division for nearly another decade, until they hired Sparky Anderson and developed a new generation of Tigers that became one of the better teams of the 1980s. And you can bet the Tiger faithful stayed with the team for all those years, through good times and bad.
Posted by Chris Stufflestreet at 8:30 AM