The Best of Intentions

Among the 1972 Topps All-Star Rookie Team, there is one Hall of Famer (Carlton Fisk) and several hot prospects who played major league baseball into the 1980s. And then there was this guy: 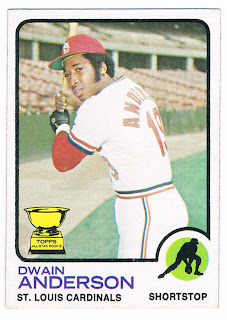 Card #241 -- Dwain Anderson, St. Louis Cardinals
Of the entire All-Star Rookie team, all of the honorees would play at least until 1980 except one. Dwain Anderson never lived up to his early promise and was out of the majors by 1974. In fact, he would set a dubious record in 1973: he would go the most at-bats (144) for any position player after the end of the dead ball era without getting an extra-base hit.

Anderson is shown here as a member of the Cardinals, but began the '72 season with Oakland before being traded to St. Louis. For all the prestige of being on the All-Star Rookie team, Anderson would be traded twice in 1973: during the season, he was traded to San Diego and then to Cleveland in the postseason. He would appear in two games for the Tribe before returning to the minors for good.
Posted by Chris Stufflestreet at 9:58 AM