The cap may be airbrushed, but it was hard to resist the chance to use that title. 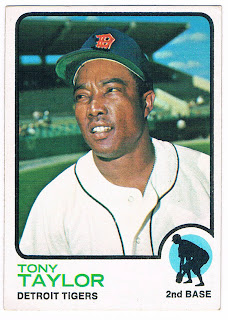 Card #29 -- Tony Taylor, Detroit Tigers
I'm trying to figure out why the cap is airbrushed, though. It appears Taylor is wearing a Tigers jersey, as he was dealt to the team from Philadelphia during the 1971 season. If the picture originally had Taylor wearing a Phillies jersey, the airbrush artist did a great job of it. One problem, though: in 1972 and '73, the Tigers definitely used an orange-colored D in Old English style on their caps, but only in road games, where the jerseys were grey. The white jersey shown on Taylor would have been accompanied by a white-colored letter D.

After coming up with the Cubs in 1958, Taylor was the Phillies' regular second sacker from 1960-'71 and was a fan favorite there. He was a threat with his glove and on the basepaths. He stole home six times, which ranks second among all Phillies players. 1973 would be Taylor's final season in Detroit. During the offseason, he swent back to Philly as a free agent and spent three more seasons there as a utility player. When he retired in 1976, he was the oldest player still active. He played more than a thousand games at second, still the all-time Phillie record.
Posted by Chris Stufflestreet at 8:30 AM