While I usually talk about the picture when I share my cards here, this time I'll share a memory. Here is the very first Topps card of Lynn McGlothen: 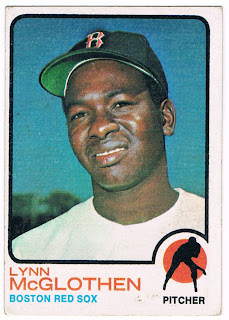 Card #114 -- Lynn McGlothen, Boston Red Sox
When I was a young collector, McGlothen was on one of the very first cards from 1973 I ever owned. I was still an infant in '73 and never began collecting cards until 1978. While trading with friends with older brothers, the oldest cards available in trades were from 1975, so I had to wait until I found a card dealer before I could get anything from 1973. That day finally arrived in the Summer of 1984. Searching through a commons box, I ended up getting several 1970s cards, including a '70 Cesar Tovar (then my oldest card), two '71s and a half dozen '73s. Lynn McGlothen was among the '73s.

A short time later, I noticed in the sports section of the Watertown (N.Y.) Daily Times that McGlothin had died in a trailer home fire. Even at nearly 12 years old, it seemed hard to realize the smiling man in this picture was gone. For some reason, I went to the local library and did some research and discovered that other players on my cards were also dead. I knew about Thurman Munson but found out that Lyman Bostock, Don Wilson and Francisco Barrios had died as well.  McGlothen's death not only helped me understand a little more about how dying was a natural part of life, it also helped me see that players will be forever alive for those who collect their cards. It's a good lesson for a young person.

At the time this picture was taken, McGlothen was still trying to make the majors. After short stints in Boston from 1972-'73, he was traded to the Cardinals and had three solid seasons before shoulder problems derailed his career. He hung on with several teams through 1982 before he was released for the last time. Less than two years after that, he was gone for good. He was 34 years old.
Posted by Chris Stufflestreet at 8:30 AM