Odd Choice for a Picture

After years of boring, predictable pictures, Topps decided to use game-action photos on their baseball cards during the early 1970s. The change was good, since they allowed cards to show players doing their job. However, Topps did go through a learning curve regarding their photo choices.  Sometimes, the picture that actually shows up on the card can be interesting: 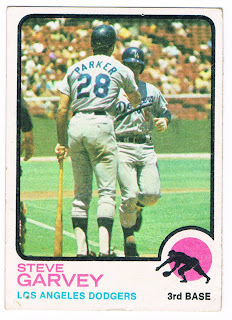 Card #213 -- Steve Garvey, Los Angeles Dodgers
In actuality, this card sows more of Wes Parker than it does of Steve Garvey. As Garvey is coming to the plate and scoring, Parker is reaching out to shake his hand before facing the pitcher. Unfortunately, Parker obscures Garvey and covers up part of his face. This picture could have been better at a different angle or a half-second later...but sometimes the man with the camera can only get so close to the action.

While we're on the subject of the picture, couldn't the umpire's arm and catcher's gear at the far left be cropped out?

Garvey spent eight years as one-fourth of the longest-lasting infield tandem in baseball history along with Ron Cey, Bill Russell and Davey Lopes. In 1974, he would win the National League MVP award. The next season, he started a streak of 1,207 consecutive games that was impressive until a youngster named Cal Ripken came along. As a photogenic player who lived in Los Angeles, Garvey would show up on TV and became one of the Dodgers' more popular players. He would spend his entire playing career in the National League West (and Southern California), playing his final five seasons with San Diego.

Lastly, Garvey carefully crafted an image as "Mr. Clean" and harbored political aspirations, only to have them fall apart after details of his personal life were made public. As somebody who came of age while Garvey's playing career was winding down, I didn't see the problem with those allegations: after all, a person who is tagged as a serial adulterer and illegitimate father is only doing what politicians routinely do to taxpayers.
Posted by Chris Stufflestreet at 8:30 AM