Not Your Normal Background...

While 1970s style is often interesting in an unintentionally funny sort of way, some of the color schemes seen during the decade were flat-out hideous. I give you the following example: 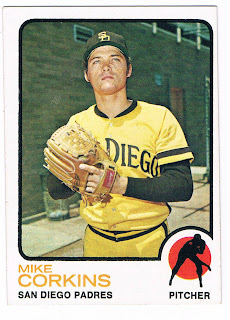 Card # 461 -- Mike Corkins, San Diego Padres
The San Diego Padres may have worn the ugliest major league uniforms of the early 1970s. Whoever thought that having jerseys match the colors of household appliances was likely sampling from a bad stash. On the other hand, they weren't using the other major 1970s stove/refrigerator/washer/dryer color, avocado...

By the way, this is definitely a 1972 road uniform, as the Padres adopted a cap in '73 that incorporated a gold/yellow color on the cap behind the "SD" logo. An example of the new cap can be seen below in a picture from Nate Colbert's '74 Topps card:

We know Corkins is wearing a road uniform, since their home jerseys said "Padres." I just want to know where the picture was taken. The brick wall in the background isn't something that often shows up in baseball cards, nor is the garbage can seem below Corkins's right elbow (i know it's on the left, but that is his right elbow).

Mike Corkins was both a starter and reliever for the Padres and played at least part of their first six seasons as a team, but the only two full seasons he spent with the club were 1972-'73. He never finished any season with a winning record. However, he'll be remembered by some fans for two reasons: his first major league game was mentioned in Jim Bouton's Ball Four and he threw the pitch that gave Willie Mays his 600th home run. And how timely is it for me to mention a 600th career homer?
Posted by Chris Stufflestreet at 8:30 AM