There's a rule of thumb about managers: better players don't necessarily make better managers. Here's a card showing a rookie manager who had never appeared in the majors as a player: 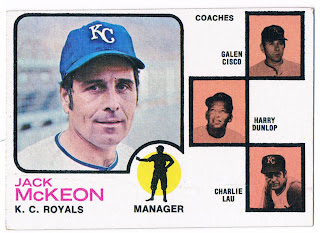 Card #593 -- Jack McKeon, Kansas City Royals Manager
1973 was McKeon's first year as a major league skipper. He was 42 years old and had been a catcher during his playing days but never rising above B-level (or AA in today's structure) ball. After hanging up his spikes for good in 1959, he worked as a scout and coach. When he joined the Royals organization in 1969, he managed their AAA farm club to two championships in his four years and was moved up to the home club. The Royals posted the best record of their short history in '73, but McKeon was fired in '75. He would later lead the A's, the Padres (where he was also the GM) and the Marlins. As GM, he built the Padres team that won the 1984 National League pennant and broke the hearts of Cub fans everywhere. In 2003, he was hired to manage a sub-.500 Marlins team and led them to a World Series win over the heavily favored New York Yankees. Though he retired from managing in 2005, McKeon still works in the Marlins' front office today.

Three coaches are shown from McKeon's staff and perhaps the most significant is Charlie Lau, the hitting instructor instrumental in developing George Brett as a superior major league batsman. His book The Art of Hitting .300 is still highly-regarded. Cancer claimed Lau in 1984.

Galen Cisco's major league career included stops in Boston and New York (where he was one of the original 1962 Mets) and ended during the Royals' first season in 1969. After serving as the pitching coach in Kansas City, he served in the same capacity with several other teams. With the Toronto Blue Jays in the early 1990s, he helped the team win back-to-back World Series titles.

Like McKeon, Harry Dunlop was a catcher who never made the majors as a player but was nevertheless able to enjoy a long career as a coach. Many of those seasons were spent with McKeon. As a player, he caught a three no-hitters in 14 days, one of which saw 27 strikeouts in nine innings, something that had never happened in a professional game before.
Posted by Chris Stufflestreet at 8:30 AM