How Much Time Do You Need?

It's no secret that Topps seemed to pay a lot of money to its airbrush artists. Sometimes, however,it seems they may have been better off just paying a freelance photographer a few bucks to update a player's picture at some point during the season. Take this card, for instance: 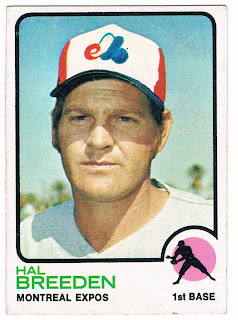 Card #173 -- Hal Breeden, Montreal Expos
The airbrush job is quite colorful. It isn't a bad job, just noticeable. Assuming the original photo of Breeden had him in his former Chicago Cubs uniform, it should be pointed out that he had been traded to the Expos at the beginning of the 1972 baseball season. Therefore, Topps had the entire year to update his photo.

While it's true Breeden spent half the '72 season playing for his new team's AAA club in Virginia, he still managed to reach the parent club after the All-Star break and played in 42 games with them. Twice, he played in series at Shea Stadium, just a short distance from Topps' corporate headquarters. Perhaps the card company wasn't impressed enough to think he'd still be playing in Montreal for 1973, but they seem to have no problem getting him to sign a contract with them.

1973 would be Breeden's finest year in the majors. He appeared in more than 100 games, often as a late-innings replacement or pinch hitter. He was on a power tear, hitting 15 home runs (in five seasons, he only notched 21 of them); however, it was also the only one of his five seasons to see him hit better than .250. He would remain with the Expos (and on Topps cards) until 1975.
Posted by Chris Stufflestreet at 8:30 AM