I've Got a Beef Here!

Sometimes, you can look at something and know exactly what it is without much effort. In that case, what you see here is definitely a Topps baseball card. The picture combines a game-action shot with airbrushing: 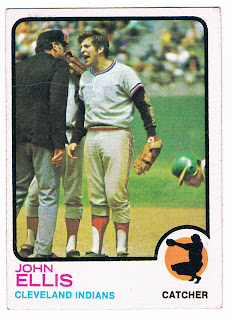 Card #656 -- John Ellis, Cleveland Indians
The look on Ellis's face just says, "Sir, I don't believe I completely concur with your assessment." Or something a lot more direct and less polite. The A's baserunner, on the other hand, is dusting himself off and remaining out of the discussion.

Although this is an awesome picture of the aftermath of an umpire's on-field ruling that wasn't exactly well-received by the fielder, a couple of things look odd in the picture. First, Ellis is in the infield, clearly not catching as the position icon shows. Secondly, he doesn't appear to be wearing a major league uniform. That's because Ellis had spent all of 1972 with the New York Yankees before being traded to Cleveland in the deal that sent Graig Nettles to The Bronx. The Yankees road uniform has had the "NEW YORK" airbrushed off, red, white and blue piping has been painted around the edges and his stirrup sock have been painted red. The teammate to his left (behind the umpire) has a small part of his hat and stirrups airbrushed the same red color. While it looks bad, it's actually a better job by Topps than how they showed Nettles in his own new uniform for '73.

While looking through Ellis's game logs on Baseball-Reference.com, it appears he didn't play against the Oakland A's on the road at all that season. However, in 1971 he played two August games at first base in Oakland. Therefore, it appears this picture was from that year. In 1973, he would become the very first designated hitter in the Indians' history. Remaining with the Tribe until the end of the 1975 season, he was traded to Texas where he would remain until 1981.
Posted by Chris Stufflestreet at 8:30 AM